1. Provide services for people in need

Catholic Charities of Louisville provides help and creates hope for those who are poor, vulnerable and on the edges of society. We believe all people deserve the care necessary to uphold their dignity and alleviate their suffering, and we offer a breadth of programs to achieve these goals

2. Advocate for justice in social structures

Catholic Charities is called to advocate for justice in social structures. The agency’s advocacy work operates out of the Mission Advancement Office.

3. Call the entire church and others of goodwill to do the same

Catholic Charities of Louisville encourages others of good will to join us in our mission, and there are so many ways to get involved with the work we do.

Together with the Universal Church, Catholic Charities of Louisville will lead our communities in addressing social justice issues through its ministry.

Our Catholic identity is most realized in the lives of women and men, who throughout the ages, have given witness to our faith by their actions of charity and outreach in service to people’s needs, especially of the most vulnerable. These saints continue to inspire each one of us. For that reason, each of our programs here at Catholic Charities has an identified patron saint. Click below to learn more about each of our program’s saints… 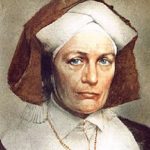 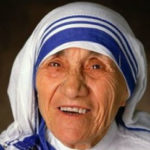 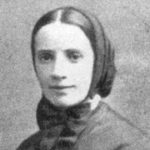 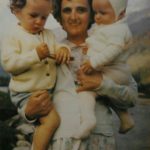 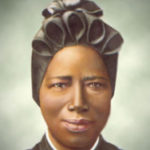 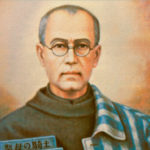 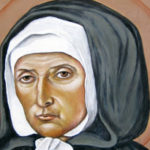 Catholic Charities of Louisville was established in 1939, and it operates as a legal entity under the Archdiocese of Louisville. Its purposes originally were: 1) coordinate the work of charitable institutions under diocesan authority; 2) direct services for children and families; 3) direct the work of professional workers and volunteers into needed areas of service; 4) act as a link between Catholic social work and other community welfare organizations. 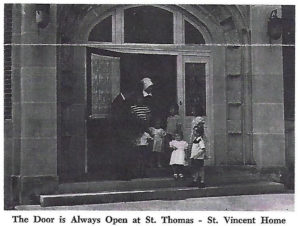 In 1939, when Catholic Charities was established locally and affiliated with the national organization in Washington, D.C., Bishop John A. Floresh appointed Rev. Herman J. Lammers as agency director. Monsignor Lammers had received professional education in social work at Catholic University of America in Washington, D.C., and had experience in social welfare, having worked with parish programs. He remained the director for the next 36 years, providing excellent leadership to the agency and in the community.

In 1939, Archdiocesan services were largely centered in three child welfare institutions that pre-date the agency: St. Vincent Home for Girls, St. Thomas Home for Boys, and Our Lady’s Home for Infants, each of which was separately incorporated under Kentucky Law as a child care and child placing institution. St. Vincent’s Home operated under a charter of corporation legislated by the General Assembly of Kentucky in 1832, and St. Thomas Home was chartered in 1868.

Our Lady’s Home for Infants was incorporated in I926 under the present Kentucky Corporation Statutes. As a matter of practice, all children accepted for care at all three institutions were committed under the respective constitutions of these institutions, under the signatures of parents or by court order. Children were accepted and services rendered to parents of all races and religions.

The Sister Visitor Center (SVC) began in 1969 in an effort to help meet the needs of the poor living in the Portland, Shawnee and Russell neighborhoods of west Louisville and continues to do so today. As an associate member of the Area Community Ministries, SVC serves approximately 300 households every month.

At their annual meeting in 1947, the Catholic Bishops of the United States, anticipating the passage of the Displaced Persons Act of 1948, authorized the organization of a National Resettlement Council. Locally, Archbishop Floresch assigned this duty to Catholic Charities. The agency located sponsors, evaluated home and job opportunities, and helped with overall adjustment of persons and families. The agency resettled 213 persons from Europe and 46 from other parts of the United States. In 1975, Catholic Charities Migration and Refuge Services (MRS) officially formed in response to the influx of refugees from Southeast Asia.

Since then, MRS has resettled nearly 30,000 refugees representing 60 nationalities. Our MRS department embodies a dozen nationalities and is fluent in 15 languages. More than 30 staff members perform numerous services to resettle refugees.

KOR serves as the Kentucky State Refugee Coordinator’s Office designated by the U.S. Department of Health and Human Services Office of Refugee Resettlement (ORR). In addition to managing more than $10 million in federal resettlement funds, the office provides leadership, policy guidance and advocacy on issues affecting the refugee resettlement network in Kentucky.

Catholic Charities has housed the District Long-Term Care Ombudsman Program (LTCOP) since 1995. The program represents the residents of long-term care nursing facilities in the KIPDA District, investigates complaints made by residents or family members, and brings about a resolution that is satisfactory to the resident. As of 2017, the program was responsible for 109 facilities and 7,835 residents in the KIPDA region.

Unlike other types of ombudsmen, our staff represents residents and their family members. One of the requirements of the program is that we must employ one staff member per 2,000 beds, and we must have at least 28 certified volunteer ombudsmen. We must visit each facility at least once per quarter and assist residents and the administration of a nursing home in creating resident councils.

The Language Services program, a social enterprise, has been operating for nearly two decades to assist service providers in Louisville to provide culturally appropriate services to limited English proficient clients or patients. Its mission is to remove barriers, to expand and diversify refugee resettlement capacity in the Louisville area, to provide employment opportunities and supplemental income for clients, and to generate revenue for other anti-poverty programs offered by Catholic Charities.

The Mother Infant Care Program (MIC) began in 2000 with support, volunteerism and partial funding from the Queen’s Daughters organization to carry on their mission of helping young pregnant women in our community after the closure of Louisville’s Infant’s Home. MIC promotes caring and effective mother/child relationships via pregnancy education, best practice sharing and case management services/assistance to expecting and new mothers, parents and families. 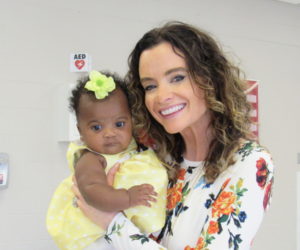 The MIC program is uniquely comprehensive, offering sessions on topics such as labor and birth, breastfeeding, legal issues, domestic violence awareness, and drug and alcohol effects on an unborn child. Incentive gifts of baby items are given for weekly attendance and a larger gift (such as a crib or car seat) is given at the completion of a six-week session. Once women have completed the MIC instructional sessions, the program offers a weekly support group for mothers to discuss issues important to them. Fathers are invited to attend the MIC classes and babysitting is offered for those with older children.

The Immigration Legal Services program was founded in 2000 to protect the rights of clients under the laws of the United States and to help them access all the freedoms of our society. It fulfills that mission by providing quality professional services at low rates, turning no one away for the inability to pay. As a member of Catholic Legal Immigration Network Inc. (CLINIC), CCL is obligated to keep fees affordable in order to serve the great demand for low-cost legal services in the area of immigration law. 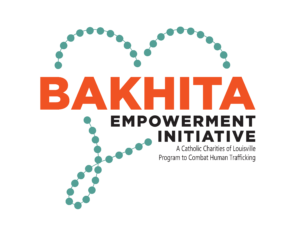 The program was created in March 2007 when Catholic Charities obtained a per-capita contract with USCCB to provide services to survivors of human trafficking. Around the same time, we initiated and helped to create the Louisville Human Trafficking Task Force that consisted of immigration lawyers, LMPD detectives and FBI agents, and representatives of various social-service providers in Louisville. At that time, Catholic Charities was the only service provider to this population in the state.

In 2007, Catholic Charities applied for a three-year cooperative agreement with the U.S. Department of Health and Human Services to create the Kentucky Rescue and Restore Victims of Human Trafficking Program with five sub-recipients in Covington, Lexington, Paducah, Somerset and Bowling Green. The agreement was received in April 2008, and Marissa Castellanos, director of the Human Trafficking program, was hired to manage the program. The goal of the program was to raise awareness of the problem of human trafficking, create new task forces, and to provide services to survivors. The program set the foundation of the anti-human trafficking movement in Kentucky. 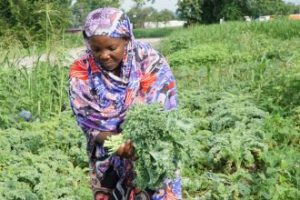 Kentucky’s Refugee Agricultural Partnership Program (RAPP) began in 2007, upon KOR receiving grant funding from the Office of Refugee Resettlement (ORR). We received two rounds of funding, during which we served over 200 participants, established refugee agricultural sales channels, developed a strong volunteer base, and implemented ongoing program evaluation and data collection.

Upon cessation of the RAPP grant in 2013, Catholic Charities determined the program was significant to the refugee community and must be continued. Catholic Charities pledged to support the program from its general fund until outside funding could be obtained. Originally, an outside consultant was hired to write a business plan that detailed the development of the incubator farm into a social enterprise. Revenue would be generated to support the program through a portion of sales from the incubator. Though this proved to be unfeasible, the program has continued to grow. Currently, Common Earth Gardens manages or helps to manage community gardens throughout Louisville, and there are hundreds of plots used by refugee families.